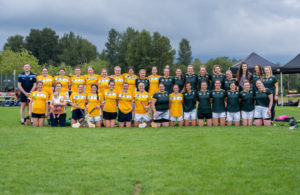 The JP Ryan’s Camogie Club Vancouver was formed in 2011 with a vision of establishing a club where camogie can flourish, develop and be enjoyed by both Irish and non-Irish in Vancouver.  This vision has transformed into a reality over the past few years, and a successful camogie club has been established.  We welcome players of all abilities, from beginners to experienced, and all nationalities to play camogie with the JP Ryan’s.

Since 2018, the JP Ryan’s hurling team became their own standing body. After this news, the camogie team voted to stay with ISSC Vancouver. The club continued to run both camogie academy and training throughout 2019 until COVID put a pause on the camogie calendar and development.

However 2021 was a surprisingly successful year for camogie within the club. We successfully had enough members to split the club into two promising camogie teams called ISSC Shamrocks and ISSC Pearse’s. This was the first time in Vancouver that we managed to hold a competitive camogie championship between both teams. We also celebrated 10 years of Camogie in Vancouver and the club. The clubs treasurer and club legend El Marie Cronin made a warming heartful speech at the summer championship in Burnaby Lakes where she mentions that it takes a village to keep the club going and that it does.

2022 promises to be another successful year for our camogie club. Our player reps for 2022 are Roisin Ryan and Sasha Samon. Thank you to Nicola Coleman and Louise Gavin for all their hard work in 2021. To add to the good news manager Jim Fogarty and his coaches Eddy and Shane will remain in management for the year ahead.

As we continue to develop, promote and expand our club, we encourage anyone with an interest in playing camogie to contact the club at camogie@www.isscvancouver.com

Follow the link below to our Camogie Facebook page will keep you up to date with training and game times (as well as other club information).